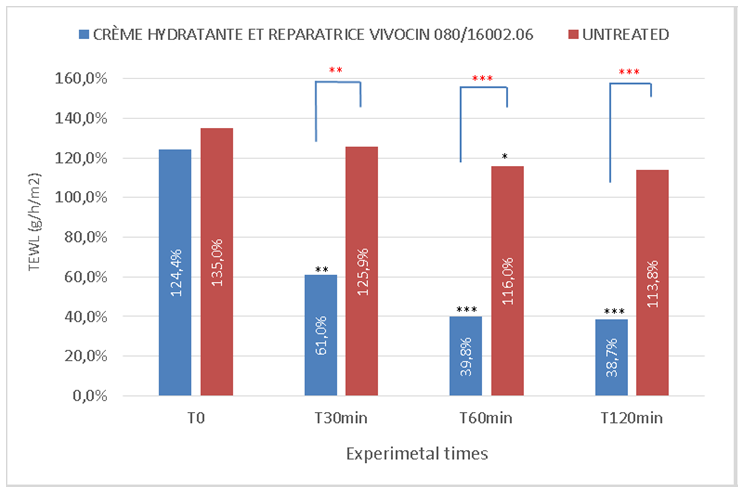 Dexpanthenol (also called Panthenol or Pro Vitamin B5) is commonly used for wound healing in pharmaceutical products. It was discovered in the 1930ies and is one of the most well researched ingredients in dermatology. It plays a vital role in the production of the energy needed to repair skin structures.

Further beneficial effects of dexpanthenol have been observed in patients who have undergone skin transplantation, scar treatment or therapy for burn injuries and different dermatoses. Topical dexpanthenol acts like a moisturizer, improving stratum corneum hydration, reducing transepidermal water loss (TEWL) and maintaining skin softness and elasticity. Dexpanthenol also stimulates the activation of fibroblast proliferation, which is of relevance in wound healing. Accelerated re-epithelization in wound healing, monitored by means of the TEWL as an indicator of the intact epidermal barrier function, has also been seen**.

Dexpanthenol has an anti-inflammatory effect and considerably improves the symptoms of skin irritation, such as itching, dryness, roughness, scaling, erosion/fissures. Topical administration of dexpanthenol preparations is well tolerated, with minimal risk of skin irritancy or sensitization **

Niacinamide (also called Vitamin B 3 or Nicotinamide) is commonly used in the pharmaceutical industry for its anti-inflammatory and skin barrier restauration properties. It was discovered in 1937 and has played an important role in dermatology for decades.

Other studies confirm that Niacinamide is an effective agent for overall barrier enhancement by promoting epidermal lipid and protein production. Treatment with niacinamide increases barrier components and increases the skin’s resistance and response to damaging agents.**

Vitamin E (also called alpha-tocopherol) is used by dermatologists and physicians for its calming and antioxidant effects. It was discovered in 1922 it has played a key role in experimental and clinical dermatology for more than half a century.

More common applications of vitamin E includes treatment of burns, surgical scars and other wounds. It is also common in products used for healing and calming atopic dermatitis or eczema. Advances in research on the physiology and mechanism of vitamin E in human skin has led to the development of numerous new formulations for use dermatological products. Research suggests that topical vitamin E also has skin barrier stabilizing properties.

Squalane is a natural substance manufactured within our own skin that offers protection and hydration. It is nourishing and boosts the skins ability to regenerate. Originally derived from deep sea sharks squalane has been used for centuries for its health benefits. Recently high performance vegan alternatives are available. Vivocin only uses 100 % plant-derived squalene respecting animal rights and sustainability.

Naturally occurring in our own bodies, it is among the most common lipids produced by human skin cells, making up approximately 10 percent of our sebum. On the skin’s surface it acts as a barrier, both protecting the skin from moisture loss and providing a shield for the body from environmental toxins. Many medical professionals assert that squalane can be effective in treating the symptoms of atopic dermatitis, eczema, rashes and sun burns. This antioxidant-rich ingredient fights free radicals in the skin and it has good antibacterial properties.

Shea butter (also known as karite) has been used for its skin healing and anti-inflammatory properties for thousands of years. It is naturally rich in vitamins A, E, F and is shown to boost collagen production. It also provides some protection against harmful UV rays.*

Shea butter is an effective base for medicinal ointments. Some of the isolated chemical constituents are reported to have anti-inflammatory**, emollient, and humectant properties.

Thermal water has been used for thousands of years to treat various dermatological issues. Thanks to its purifying effect and antioxidant properties, thermal water is the very suitable to provide solutions for sensitive or atypical skin types. Due to its soothing properties it can relieve the skin from dryness, irritation and itchiness. Rashes due to eczema, rosacea and psoriasis will become less noticeable and can possibly disappear completely.

Vivocin uses only Swiss spring water in its products. We source our water from the alpine region, far away from the pollution and contamination that can be found in more urban areas.